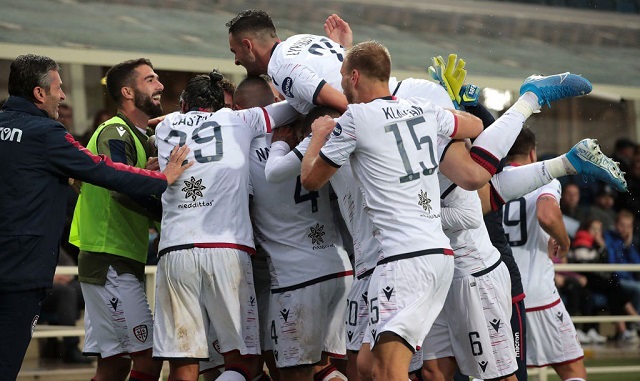 Atalanta’s incredible goalscoring streak to start the 2019-20 Serie A season campaign to an end on Sunday when they were beaten 2-0 at home by fellow high-fliers Cagliari.

I Nerazzurri had scored two or more goals in each of their first 10 league games this season before the visit of Rolando Maran’s side to the Stadio Atleti Azzurri d’Italia on Sunday.

Cagliari created the four best chances of the first half even before they took a 32nd minute lead when a whipped free kick took a couple of deflections before rolling into Pierluigi Gollini’s net.

Only seven minutes later and the hosts were reduced to 10 men when Josip Illicic was shown his marching orders for kicking out.

The visitors had the ball in great positions and with numbers advantages but often let themselves in the final third; rarely testing the Atalanta goalkeeper.

That was until Christian Oliva doubled Cagliari’s lead just before the hour following a clever backheel from Giovanni Simeone.

Atalanta’s week doesn’t get any easier as they play host to English Premier League champions Manchester City in the Champions League on Wednesday night, having lost the reverse leg 5-1 only a fortnight ago.