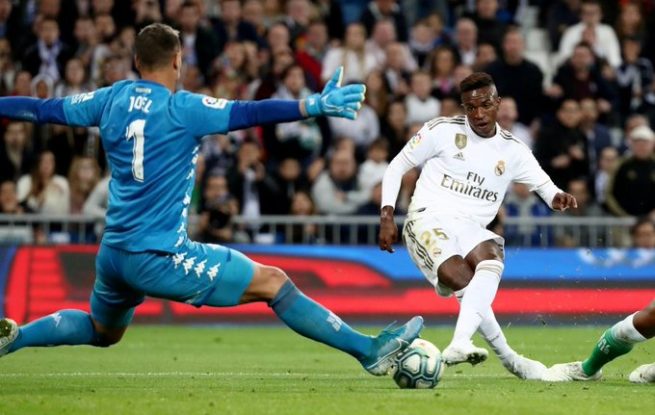 Real Madrid missed the chance to go top of the Spanish La Liga on Saturday night as they were held 0-0 at home by Real Betis.

Earlier in the day, Sevilla and Atletico Madrid had played out a 1-1 draw at the Ramon Sanchez-Pizjuan Stadium and Barcelona were surprisingly beaten 3-1 at Levante.

Victory for Zinedine Zidane’s side would have put them two points ahead of their biggest rivals and top of the table.

However, they were very disappointing in a game they were expected to win at the Santiago Bernabeu. Aside from Eden Hazard having a goal disallowed for offside in the opening 15 minutes, Real Madrid rarely caused too many problems for Joel Robles in the Real Betis goal.

Left-back Ferland Mendy did have a one-on-one in the final 20 minutes but hit the outside of the post with Robles closing him down.

Real Betis offered some threat on the counter-attack too but will be pleased with their point after a slow start to the season. Rubi’s side are now four points above the drop zone as the bottom four all lost this weekend.

Barcelona and Real Madrid could end the weekend as the co-leaders on 22 points after 11 games, whilst both Sevilla and Atleti are one point behind but each having played a game extra. Granada have the opportunity to leapfrog all four sides above them by beating Real Sociedad on Sunday night.