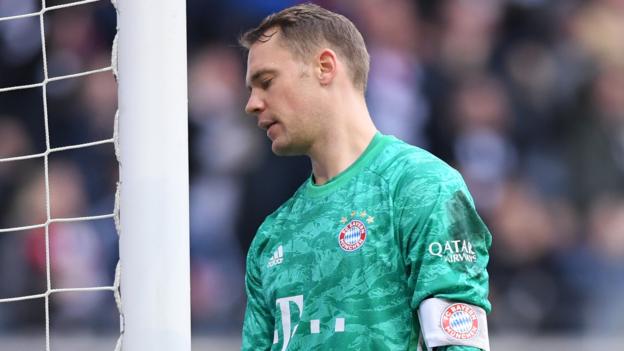 Eintracht Frankfurt handed Bayern Munich their heaviest defeat in more than five years as they hammered the defending German Bundesliga champions 5-1 at the Commerzbank-Arena on Saturday.

The Bavarians were reduced to 10 man after only nine minutes when Jerome Boateng failed to cut a through ball out towards Goncalo Paciencia before bringing the Portuguese forward down on the edge of the area as the last man. The referee initially awarded the visitors a penalty, which was changed to a direct free kick after consulting VAR, and showing Boateng his marching orders.

Adi Hutter’s side began making the numerical advantage count midway through the first half when the ball ricocheted kindly into the path of Filip Kostic to open the scoring from two yards.

Eight minutes later and it was 2-0 when Djibril Sow volleyed home Kostic’s cross at the back following a lovely move.

However, Robert Lewandowski is the best striker in world football right now, and once again got on the scoresheet with a fine solo effort 60 seconds after Joshua Kimmich had a goal ruled out for offside.

Eintracht Frankfurt have been inconsistent this season but weren’t going to let this opportunity slip away on Saturday afternoon, restoring their two-goal lead four minutes after the break when David Abraham poked home Danny da Costa’ cross at the back post.

Martin Hinteregger made it 4-1 on the hour with a header at the near post from a corner that had been won after Manuel Neuer had excellently denied Bas Dost in open play.

Goncalo Paciencia completed the route six minutes from time by tapping into an unguarded net after Andre Silva had unselfishly cut the ball back from the near post.

This was Bayern Munich’s biggest defeat since Pep Guardiola’s side were hammered 4-0 by Real Madrid at the Allianz Arena in their Champions League semi-final second leg in April 2014.

Borussia Monchengladbach’s 2-1 win at Bayer 04 Leverkusen extends their lead to three points at the top of the table, whilst victories for Borussia Dortmund and RB Leipzig saw both sides overtake Bayern Munich.